How Do I Land? 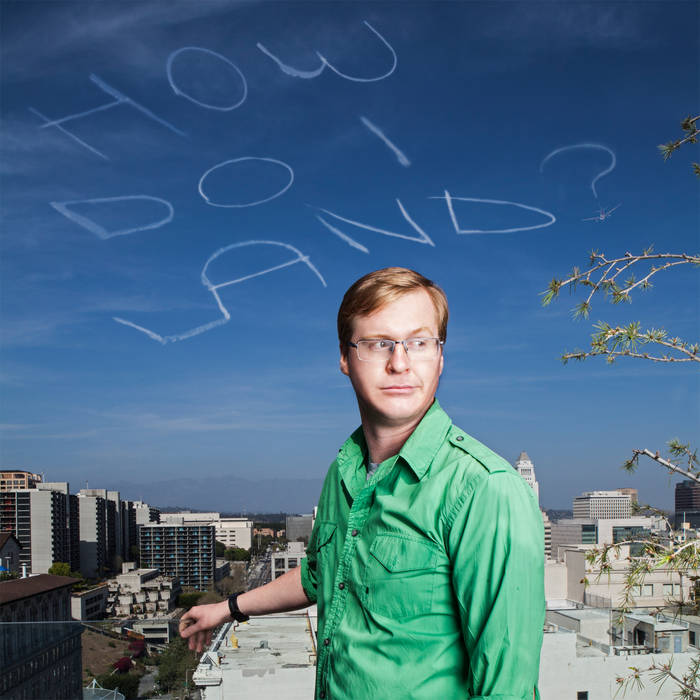 David James Young Absolutely nothing in 2013 made me laugh like this album did. Fuck you, Biscotti! Favorite track: Three Fun Things.

David Beach Kurt makes me laugh! Also lunch number 2 is a fun lunch to have.

Kurt was chosen as featured comic in Variety’s annual prestigious “10 Comics To Watch” list. He was also featured in Time Out New York's list of 50 Funniest New Yorkers, named as a "Comic to Watch" by Comedy Central, the New York Comedy Festival and TimeOut NY, as well as “Best Male Stand-Up” by the ECNY and “Best Unscripted Host” by the New York Television Festival.

In early 2013, venerable indie label Kill Rock Stars announced Kurt as the first comedy signing for the label. Kurt’s debut album How Do I Land?, recorded live at packed rock clubs in Seattle and Portland, is set for release late summer 2013. The album’s name comes from Kurt’s “Cloud Project” in which he raised $6k on Kickstarter and hired a pilot to write the words “How Do I Land?” across the LA sky. The resulting skywriting images went viral.

On TV, Kurt can been seen (or heard) on Bob's Burgers, Delocated, Chelsea Lately, John Oliver Stand Up, The Heart She Holler,  Comedy Central Presents, Jon Benjamin Has a Van, Assy McGee, Human Giant and as host of IFC’s hit comedy game show Bunk!, He can also be heard on the radio on This American Life talking about his 13-year relationship Rumspringa.

Called "a prolific stand-up comedian" by the Los Angeles Times, Kurt has performed his whip-smart comedy on stages across the world as featured act and at festivals including Outside Lands, SXSW, All Tomorrow's Parties, Bonnaroo, Just for Laughs Comedy Festival in Montreal and Chicago, and on IFC’s Comedy Bang! Bang! Live. Oh, and he once performed at Radio City Music Hall.

Kurt co-created and co-hosted the continuously sold-out NYC variety show, Hot Tub, for 7 years with his comedy writing partner Kristen Schaal. The duo moved the show to LA and in Jan 2013 it relaunched with a sold out show at The Virgil. Hailed as “the hottest new comedy show” by Los Angeles Magazine, Kurt and Kristen continue to curate, host and peform Hot Tub to a packed house every Monday night.


"Kurt Braunohler is the Andrew WK of Comedy." – Time Out NY

“Do you like wunderkinds? Then you will LOVE KURT!” – BrooklynVegan

"Braunohler's brand of humour is insane, life-affirming, silly and above all hugely enjoyable." - Time Out London

Recorded at Mississippi Studios, in Portland, Oregon on February 14th, 2013.

Recorded, mixed, and produced by Jeff Hylton Simmons of NWRecording.com

Written and performed by Kurt Braunohler.

I’d like to thank my mom, Lauren Cook, Kristen Schaal, Rich Blomquist, Scotty Landes, Albertina Rizzo, Chris Hauselt, Damien Henderson, Rob Andrejewski, Paddy Shepherd, Steve Shaheen, Joe Fili, Neutrino, Ian Karmel, Portia Sabin and everyone at KRS, my dad, my brother,
all 6 of my sisters, everyone who ever came to Hot Tub and listened to me slowly create these jokes, everyone at Littlefield in Brooklyn, and at The Virgil in LA, Kevin Roo Jobes for first introducing me to Kill Rock Stars when I was 15, everyone who donated to the Kickstarter to write stupid jokes in the sky, CVS for never arresting me for putting cards back and screwing up their inventory, Doug Stanhope (who I’ve never met) for inspiring me to think about comedy seriously, Scott Moran for giving me a reason to start thinking, and everyone in the New York City comedy scene – this record would not exist without you.

Bandcamp Daily  your guide to the world of Bandcamp